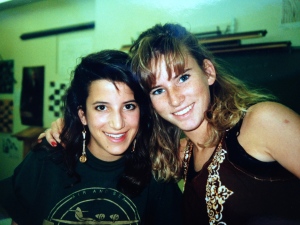 Last week I lost my longest-held friend. Erin and I met on the first day of 7th grade. We were assigned to the same table in Mr. Naka’s science class and remained lab partners all year. We bonded that year and I clung to her friendship as a lifeline during a very difficult year. She generously humored me, even though she didn’t need to, including me in her clique, even setting me up with a family friend for a school dance. Erin was kind from the start.

Our friendship continued throughout junior high and high school. We did many things together: drama club, tennis team, AP courses, SAT prep, National Charity League. Our lives overlapped in many ways, but we were not best friends. Erin matured and she always seemed, to my sensibilities, more sophisticated, more intelligent, more daring than I – cooler in every way important to a teenager. Often our connection was defined more by our academic commonalities than our personalities. I’m not sure our friendship would have continued beyond high school had we not ended up at the same college.

But, we did. In fact, in some ways our lives have followed an eerily similar track. We both went to Berkeley. Amongst a student body of over 30,000, we ended up traveling in the same small circle of about a dozen people by sheer coincidence. We both spent a year abroad and travelled a little bit together. We both got graduate degrees from UCLA, and attended each other’s weddings at home in Palm Springs. Academia dragged us both to somewhat distant outposts to begin our families, and then we each landed back in the Bay Area to raise our children. And, finally, we both ended up with Stage IV metastatic cancer diagnoses.

She went first on that last one. I got the call. Breast cancer, she said, but it looks to be Stage I. Not exactly good news, but no reason for total panic either. The plan was to lop off those traitorous mammary glands, write off a shitty year to chemo and recovery and then move on. But things never went according to plan. I showed up on her doorstep to escort her to her first chemo infusion, only to learn that her blood tests showed liver issues. So, instead we found ourselves in the nuclear medicine department. PET scan time. The three years between that PET scan and her passing weren’t exactly a straight line downhill. There were good periods, but overall, it was a pretty tough road to witness, and much tougher for her to walk.

Some moments stand out to me. Playing Scrabble with her during an infusion at Kaiser in San Francisco, joking that I must be a real sucker for agreeing to play a word game with a Comparative Literature PhD (spoiler alert: I lost). Seeing her for the first time without hair, without eyelashes. Sitting in the crowded infusion room at Stanford, watching bright red chemo drip into her veins as the nurses cheerfully serenaded another patient around the corner, ringing the bell to signify that patient’s successful conclusion of treatment; looking into Erin’s eyes, both of us thinking the unuttered thought, she would never get that celebratory song, that bell would never ring for her.

I tried to be sympathetic and supportive. I spent more time with Erin in the last three years than I had in the previous ten. But truthfully, I think she spent more energy trying to educate me during our visits than I did supporting her. I learned a lot that would eventually prove useful. Although, of course, some things are only knowable through first hand experience. There’s a big difference between sitting next to someone getting chemo and having the IV in your own arm.

In January 2014, I got my own cancer diagnosis. Unlike Erin, whose prognosis unravelled relatively slowly, like a bad joke, getting worse with every twist, I jumped into the deep end. I checked into the hospital for an out-patient procedure. “It doesn’t look like cancer,” they said, “don’t worry.” I woke up on O2. “It’s cancer,” they said, “widespread,” and they shuttled me to intensive care. 24 hours later the IV was in my arm. 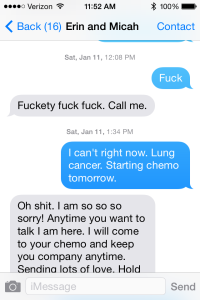 Erin was obviously top of mind as I plunged into this cancer world, joining her “in the thick of it” as she would say, leaving my safe perch on the sidelines. Who else could understand quite like she? And so, from my hospital bed, I texted my most eloquent friend a one word message. “Fuck,” I typed. Send. “Fuckety, fuck, fuck” she typed back. Sometimes, there’s just really nothing else to say. And a few days later, she showed up in my hospital room.

Armed with books, wisdom, and most importantly friendship, she was there. In the midst of her own cancer journey, she made time for me. I’d always admired Erin for her intelligence, appreciated her zest for life, loved her hearty laugh. Not that she was mean in any way, but “kind” wasn’t the first word I ascribed to her. But, now, that is what stands out to me in stark relief. Erin was kind; when I was eleven and when I was 41 and a lot of time in between. She was thoughtful and loving, honest and brave. And, she was supremely kind.

In the last eight months we touched base fairly frequently. “What supplements did your doctor recommend?” she’d inquire for her own edification. “What’d you tell your children?” I’d ask her for my own. Peer to peer we’d try to help each other. But there are so many discussions we didn’t get to have. As honest as I tried to be, I definitely side-stepped the hardest stuff. “What’s the difference between being realistic and losing hope?” I might ask her today. “How do you prepare and travel the final months, weeks and days?” I’d really like to know.

I will miss her tremendously. I already do. I will try to learn from her example. Living life with gusto, being honest, being kind. I hope my time to go is a long, long way off. I believe it is. But, when it is my time, I hope to follow her lead, and find a way to exit in a place that speaks to my heart, surrounded by those who love me, in peace.

Thank you for over thirty years of kindness and friendship, Erin. I love you. May your memory be a blessing.

[To learn more about Erin, and read her beautiful blog, please visit https://bmatzav.blogspot.com/]

← Update #5 – When Progression is not Progress
Please Join us for the Breathe Ride at Bay Club Santa Clara, October 18! →