I’ve written about living in two worlds before. It’s a continual struggle of mine. Please indulge me as I publicly process some more, in the hope that it might help others contemplating these existential questions, too.

As I’ve mentioned many times, losing friends has, sadly, become a common part of my life. Every time it happens, I mourn the loss of that friend. But also, since these friends are dying of the same disease I was diagnosed with, it can be hard not to get (even more) scared for my own personal future. A logical way to cope with this is to find differences: “their disease presented differently,” “they were diagnosed further along,” “they’re not on my drug,” etc. This tactic obviously falters the less I can differentiate myself.

In the universe of those diagnosed with St. IV lung cancer, I’ve been one of the exceedingly lucky ones. Having recently surpassed 5 years on my targeted therapy medication, and 6 years overall survival, I’m basically off the charts (literally — Stage IV Lung Cancer patients in continual, active treatment after 5 years are such a new and small phenomenon, most charts don’t even have stats tracking us). Given my luck, it’s been easier to differentiate myself from many of my less fortunate friends and indulge in the “magical thinking” that maybe something is special about my case. I’ve beaten the odds so far, what’s to stop me from continuing to beat them perpetually? It’s a nice mindset to have, but then it’s particularly jarring to lose friends (like 10+ year survivor Dan Stranathan and 9+ year survivor Allen Fremont) who, like me, seemed to be beating the odds and escaping their predicted fate, only to have reality come roaring back.

I asked two therapists: how do I simultaneously hold onto my hopeful mindset while witnessing the harsh reality of even the luckiest longest-surviving of my friends, struggling and dying? I received two helpful answers.

One therapist reminded me that I’ve done the work of researching my treatment options and establishing protocols to stay up to date; thus, there’s no further benefit to dwelling on or preparing for the future, so I might as well keep my focus on how I’m feeling now (a helpful reminder I find I must constantly revisit).

The second shared a poignant story from Dr. Elie Wiesel that I’d like to pass along.

A young boy who sat on his mother’s knee and told her that he decided, when he grew up, that he wanted to find Truth. His mother said that this was wonderful, but the young boy asked how he would know when he found it. His mother told him that Truth would come to him as a beautiful woman, with long beautiful hair, a complexion like peaches and cream, crystal blue-green eyes and when she spoke her voice would be like violins singing. He thanked her, and when he grew up and went to college he saw beautiful women all over the campus, but none looked exactly like Truth to him. So he graduated and became an international businessman, traveling all over the world and meeting many beautiful women, but none looked exactly like Truth. Then in his middle age, he woke up one night to see an apparition in front of him – a woman standing there who was almost blind, had scraggly filthy hair, a pox marked face, and when she spoke her voice was so harsh he could barely listen. Startled, he asked her who she was. “What do you mean, who am I? It’s me – Truth” she said. Taken aback, the man said “What? You can’t be Truth – you are supposed to have beautiful eyes and a gorgeous face and ….” “What are you talking about?” interrupted the woman. “I’m…….OHHHH!” she interrupted herself. “You have made a mistake….you’re talking about my twin sister Hope! This is me…Truth!”

The man was confused. Then he told Truth that he was still hoping to live many more years and asked what he was supposed to do now? “Ohhh” she replied. “That’s an easy answer. You keep searching for my sister, but at the same time in the back of your head, you always know what I look like as well. Twins, Truth and Hope, not one without the other!”

It’s a very tricky thing, hanging onto both of these things at once, but hey, with some practice I figured out how to rub my belly, while patting my head when I was about 8 years old, and this is pretty much the same, right? So, even while I know that Truth can be very ugly, I shall keep seeking Hope, which was just made easier by another round of miraculously good scans (#Update19, b”h). Thank you for all your support. 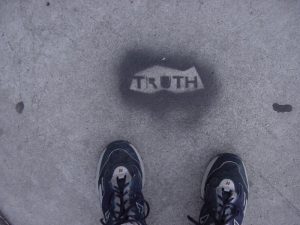 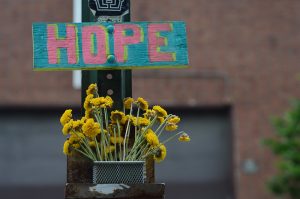