Eric and I are huge Survivor fans. We’ve loyally tuned in to every single episode of all 34 seasons since it debuted in May of 2000. It’s a fun and seemingly harmless escape.

I say “seemingly harmless” because last year, in season 33, we tuned in and got a bit of a sucker punch to the gut. Instead of escaping my reality, it got thrown in my face. One of the contestants, Adam Klein, spoke candidly about his mother’s struggle with lung cancer. He kept it a secret from the other players for the majority of the season, but in his private confessionals he did not hold back. He told of how his mom, Susie, a healthy, never-smoker, former fitness instructor had gotten diagnosed with Stage IV lung cancer out of the blue (sound familiar?). Susie’s cancer had a genomic marker with fewer treatment options than my ROS1, and she was struggling, but she encouraged Adam to go to Fiji and fulfill his lifelong dream of playing this game. It was a heart-wrenching decision for Adam to leave her side during this period, but the family really encouraged him to do so – it was at least one positive thing the family could focus on during an otherwise dark time. Adam shared his raw emotion and many tears with the millions of viewers at home. I found myself crying along with him many weeks.

Adam played really well, learning quickly and gaining momentum as the game wore on. I also tend to believe (and I think he does, too) that somehow, someway, Susie sent him some cosmic luck. And in the end, he won. It was an incredibly moving final episode when he finally broke down and shared his mother’s story with the other players. Then, on the reunion show, he revealed that upon finishing the game, he raced home to California, making it back to his mother’s side only hours before she passed. Adam pledged $100k of his winnings to lung cancer charities, generated hundreds of thousands of additional donations from others, and launched a “Live like Susie” campaign in honor of his mother.

I was a bawling wreck on my couch. I was so incredibly impressed and grateful for his candor in speaking about lung cancer and really using his family’s tragedy to help others. Finally, FINALLY, a “celebrity” willing to stand up for lung cancer patients (see my previous musings on the dearth of LC celebrity voices 1, 2, 3). I immediately found a way to message him online to convey gratitude. But, he was overwhelmed with messages at that time, and I never heard back.

Several months later, I saw a picture of him with my friend Samantha, who works at ALCF. O.M.G. WHAT?! She knows Adam? I sent her a message immediately. Stalker style. “You KNOW Adam?!?! Can I please meet him??? Please please please! #MakeAWishLisaStyle.” Samantha responded, “Sure, I think so. He’s very sweet, but very busy. Let me get back to you.” I was jumping up and down in my house, freaking out. I called Eric. I called my cousin. We were all so excited. And then things went radio silent. Weeks went by, then months. I pinged Samantha a few times, trying not to be too much of a nudge. Nuthin’. Bummer.

I had almost given up hope when one day Eric said to me, “Hey, Bonnie has invited us over to dinner in a few weeks.” My antenna went up. Hmmm … “Ok, that’s nice. Do you think this has anything to do with meeting Adam?” “Nope,” Eric said. Hmmm…. I wasn’t 100% convinced, but I didn’t think too much about it, until the evening of the dinner when Eric suggested I might want to dress in “something nice.” ***RED ALERT!*** My husband never, ever cares about fashion – like, EVER. I raised a brow at him. He scurried out of the room. He’s a pretty terrible liar (which is a fantastic trait in a husband, by the way – actually, the “not caring about fashion” part has been pretty convenient, too – love you, hubby!).

My suspicions were up, but I was still surprised when we got to the restaurant and Adam arrived at our table pretending to be a waiter, ready to take orders. It was so fun! I completely geeked out and asked him a million questions about Survivor, and tried to express how much his sharing of his and his mom’s story meant to me. He was so generous with his time, and so kind to me and my whole family. It was a very special night. Adam is a hero to me and it was truly a wish come true to meet him in person. 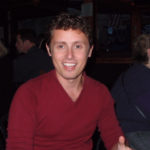 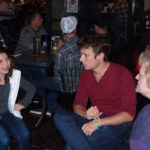 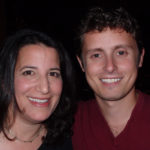 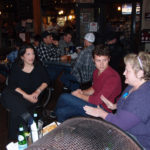 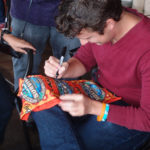 Thank you so very much to Adam, Samantha, Danielle, Andrea, Bonnie, Renee and Eric for making this “Make A Wish – Lisa Style” happen. I can’t even believe how lucky I am that you all made this happen for me. It’s a memory to treasure forever – what a gift!

Finally, while on the topic of “Lisa style” wishes, I’d be remiss not to mention that I had one other big wish come true recently. The ROS1ders, the ALCF and Champions Oncology announced a preclinical study that will develop new models of cancers expressing a ROS1 gene rearrangement (see press release here). This is really HUGE news and I will have a ton more to say about it in the coming weeks. Stay tuned!

← Pathology Lab Field Trip: A Visit with One of the “Hidden Heroes” (Part Two of Two)
Update # 13 — Straddling Two Worlds →