Field Trip to the Pathology Lab! (Part One of Two)

I have a strange idea of what constitutes a fun time these days. I get excited to attend conferences about lung cancer. I’ve been known to look forward to quality time with a friend in an infusion lab. Recently, I arranged a field trip for myself to a pathology lab! (Yup, that totally merits an exclamation point.)

A couple of months ago I had a conversation with my friend, Linnea Olsen. Samantha and I call Linnea the “O.G.” (that means “original gangster,” Dad), because, at 11 years in, she’s one of the longest surviving Stage IV lung cancer patient/advocates we know, and a phenomenal bad-ass. Linnea told me how she had gotten a tour of the pathology lab and even seen her very own cancer cells. Well, color me jealous! “How’d you get to do that?!” I pried. And casual AF, she replied, “It wasn’t that big of a deal – just ask.”

So, I did. At my next appointment, I said to my oncologist, “So, I know I’m your weirdest patient ever, but I’d really like to see my cancer cells from my biopsy 3 years ago … can you hook a grrl up?” He laughed heartily. “I’m serious,” I said. “Oh, I know,” he replied.

Two weeks later, I was in the pathology lab getting a personal tour by Dr. Charles Lombard, the Medical Director of Pathology at El Camino Hospital. Dr. Lombard had signed off on my pathology report from my original biopsy in January 2014. I think we were equally amazed to see each other. He doesn’t get a lot of patients coming through, let alone ones he helped diagnose at Stage IV over three years ago. And, I’d never met a pathologist or seen a pathology lab before.

Dr. Lombard had pulled my slides from his archive in preparation for my visit. I sat down at the microscope and peered at the images. Oddly, the images of the cancer cells–the cells that were devastating my body–looked innocuous, and even sort of beautiful. Additionally, Dr. Lombard took me on a fascinating tour of the whole pathology lab. Seeing the scope and breadth of work that goes on there was a vivid reminder of how much goes on behind the scenes of patient care.

My visit triggered some thoughts about how patients interface with their doctors and the medical system in general, which I’ll share tomorrow, in Part Two of my blog about my field trip to the pathology lab. But for this Part One, I would just like to share some photos to give a sense of what I saw on my tour, and perhaps encourage others to take the leap and join my tribe of weirdo – actually, let’s go with “engaged” – patients, and ask for your own path lab visit. If nothing else, it’s a rare opportunity to visit the hospital without getting stabbed for an IV or shoved in a radioactive tube. Fun! #CancerPatientGoals

This is an image from my ROS1 FSH test. I believe the little green and pink dots indicate ROS1+, but to me this could be a NASA image from outer space, or I have aliens inside me. I would totally buy any of those three explanations.

I thought this was a close up of the pattern from my Grandma Gladys’ bathrobe from the 60’s, but Dr. Lombard insisted it was an image of my cells.

I’m not totally sure what this is. Maybe I’m having twins? (joking, Eric)

Who sees a panda here? #GiveMeMyMD 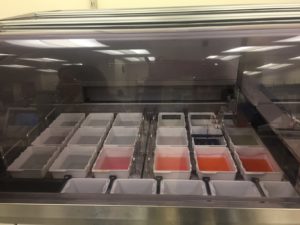 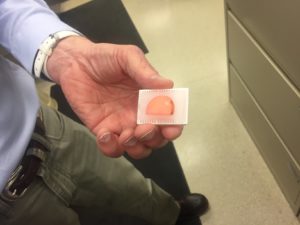 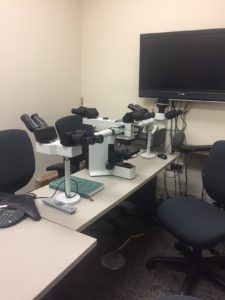 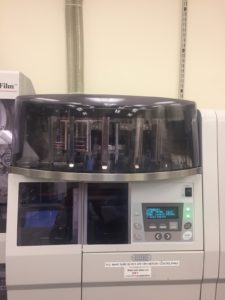 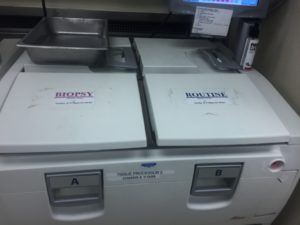 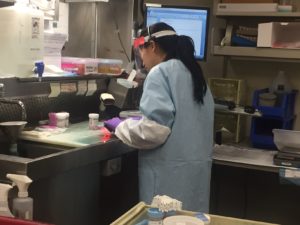 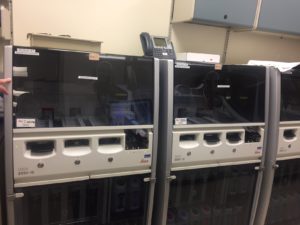 It’s like a Jamba Juice for vampires up in here.

← Fuck the “Fuck Cancer” Warrior Rhetoric
Pathology Lab Field Trip: A Visit with One of the “Hidden Heroes” (Part Two of Two) →